The impact of last year’s storm events on parks, reserves, gardens and marine sites in Victoria was widespread resulting in park closures and significant damage, in particular from fallen trees, debris, floods, damaged powerlines and landslips.

Some 2 million hectares of public land was impacted in the June 2021 storm and flood event alone.

Among the areas most affected included Wombat State Forest, Macedon Regional Park, the Yarra and Dandenong Ranges and parts of Gippsland, western Victoria and the Mornington Peninsula.

Parks were also impacted by severe storms in October, and Parks Victoria has been working across all impacted parks and reserves to make them safe and, where possible reopen them.

Of the 52 parks and reserves impacted last June, only two remain completely closed in light of storm damage. Most parks have been re-opened though some areas still require repair work to make safe the strategic fire network, walking tracks, roads and visitor sites.

Parks Victoria has undertaken a strategic program of works across the state to repair roads, bridges and fencing, clear access tracks and rebuild assets such as amenity blocks, picnic and visitor sites.

Along the Great Ocean Walk, a 14km stretch between Johanna Beach to Ryans Den was reopened this month following two months of storm repair works. Boulders and large fallen trees had to be cleared after a section of rock cliff subsided. The iconic walk is fully re-opened between Apollo Bay and the Twelve Apostles.

Works continue at the Kokoda Track Memorial Walk (1000 Steps) and Olinda Falls picnic ground which remain closed due to the extensive storm damage. Notably, the nearby Lyrebird Track is open and available as an alternative experience to the 1000 Steps.

Our crews are working as fast as they can statewide and look forward to welcoming you back to sites when it is safe. Before and after: Storm damage around Mt Dandenong Primary School was cleared so the school could reopen and to ensure fire preparedness.

“The storms in June impacted more than 50 of our parks and reserves, leaving behind widespread damage and devastation to visitor sites, tracks, bridges, roads and crossings. On top of that many of our parks were impacted from severe storms in October.

“Despite the challenges and scale of the recovery task, often in trying conditions where access can be complex, Parks Victoria staff have made significant progress to repair assets and restore access to most of our parks, with an emphasis on making them safe for people to visit and enjoy.”

At Wilsons Promontory, the storm events caused significant tree hazards across the entire 190kms of the park’s walking track network. Rangers have since been able to re-open as many tracks as possible. Before and after: Storm damage was cleared and the pathway opened between Refuge and Sealers Cove at The Prom. Before and after: Large fallen trees at Seawinds Gardens, Arthurs Seat, were removed and access restored. The aftermath of the October storms - rockslide on the Great Ocean Walk. 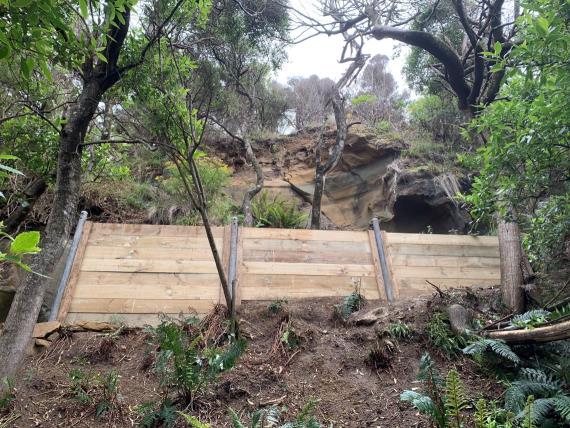 As part of the storms response across the state, there has been work to assess, identify and clear thousands of hazardous trees, rocks and tonnes of debris from popular walking tracks and roads, while excavators have aided crews to move felled and heavy stumps. There has also been restoration work to fences, infrastructure, steps and bridges.

During recovery works, careful consideration in particular is given to ensure the balance between the removal of hazards and retention for environmental benefits, and works are carried out mindful of minimising any impact on environmental and cultural values. We recognise that fallen trees provide valuable habitat for our wildlife, and where appropriate, fallen trees and debris material important for protecting biodiversity values is left in place.

Safety remains Parks Victoria’s priority focus in determining when to reopen sites, and people are reminded not to enter closed parks or sites under any circumstances, as they are deemed unsafe until appropriate assessments are completed.  Remember to observe signage and stay out of fenced or taped off areas, and report any instances of fallen or leaning trees and branches to Parks Victoria on 13 1963.

Below is a list of some parks and sites impacted by storm damage (as of mid-February 2022). Please check for any updated changes affecting the park you intend to visit by going directly to the individual park page on the Parks Victoria website. You can also visit the Safety in Nature page or contact the Parks Victoria Information Centre on 13 1963.

If your favourite place is closed there are still a lot of options for short walks, hikes and sightseeing across Victoria - visit Places to See for alternative places to visit, or visit Things to Do for more details.

Macedon Regional Park – partial closure, some roads and tracks remain closed, including the section between Bawden Road and the Memorial Cross Reserve, as well as Hoods Track and Link 2 Track