Dogs are not permitted in Mornington Peninsula National Park. This includes beaches, carparks and Greens Bush.

Coppins Track
This walk starts at Sorrento Ocean Beach and winds 4 km along the clifftop to Diamond Bay. Take a walk through time, and discover some of the changes that have happened in the area during the last 100 years.

Lifesaving Track
This 11km track was constructed in the 1890s to provide better access to the coast after two devastating shipwrecks.  A number of lookouts provide breathtaking views down the coast, with good vantage points at the Bay of Islands, St Paul’s, Koonya Ocean Beach and No 16 (the 16th lifesaving point). Detours to Diamond Bay, Jubilee Point and St Paul’s are well worth the trip.

Cape Schanck to Bushrangers Bay
Follow the Bushrangers Bay track from the eastern carpark at Cape Schank to see some of the best coastal scenery near Melbourne. The track finishes at Bushrangers Bay, a sandy beach formed by Main Creek and surrounded by basalt cliffs. The return walk takes about 2 hours.

An extension to the track is part of the Two Bays Walking Track and leads to Rosebud Flinders Road (3km). This track provides fine views and passes through shady banksia groves before continuing northwards across the road and through stands of eucalypt and banksia towards Greens Bush (10km).

Greens Bush walks
Situated between Arthurs Seat and Cape Schanck, Greens Bush is the largest remnant of bushland on the Mornington Peninsula.  The area contains a variety of vegetation communities and is a wildlife haven, making it an excellent place for nature walking.

Baldrys Long Circuit, 3.6 km
This track weaves further into the forest. There are several creek crossings, and the green, moist fern gullies are a welcome contrast to the drier forest. Depart from Baldry Crossing (Melway map 254 G6).

Long Point Circuit, 4 km
Accessed off the Two Bays Track, or midway between Highfield and Gate 3 on Rogers Road, this circuit passes through eucalypt woodlands with views across open grasslands and shady gullies of Coast Banksia and Blackwoods.

Two Bays Walking Trail, 8.9 km
The longer Two Bays Walking Trail is an excellent way to see Greens Bush, is a link in the 26 km bush corridor from Dromana to Cape Schanck. There are several highlights along the trail - eucalypt forest mixed with spectacular stands of grasstree (the taller grasstrees may be over 200 years old), pockets of tea-tree thicket alive with birds, picturesque fern gullies and open grasslands.

The Two Bays Walking Track is identified by a circular symbol displaying a Blue Wren, which can be seen on signage along the track. Whether you’re after a gentle stroll or something long-distance, there are walking trails to suit all levels of fitness and ability. Pack the car and round up your family and friends. Whether you're seeking relaxation or adventure, parks offer a variety of day trips close to Melbourne. Stash some supplies into a back pack and take the family out for a day trip and in only a short drive from Melbourne you can be surrounded by nature. 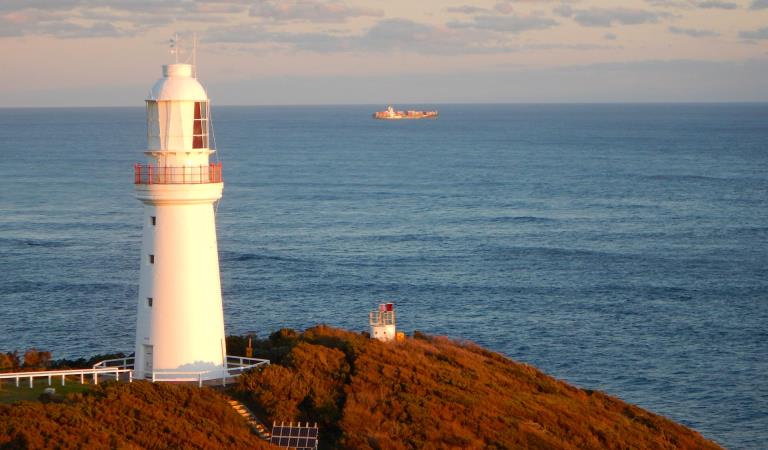 Learn about the seafaring past of Victoria's rugged and unforgiving coastline at marine and maritime exhibits and sites. Observe the dramatic landscapes and coastal scenery of Victoria from lookout vantage points dotted across state and national parks.

Download the Mornington Peninsula National Park visitor guide for more information about the park and the plethora of experiences to be had within its borders.

To make it easier for people with limited mobility to see the all abilities access and experiences on offer at Cape Schanck Lighthouse Reserve in Mornington Peninsula National Park, Parks Victoria has released this video - produced and narrated by accessibility advocate Ryan Smith, who uses a wheelchair.

Lightwood Creek Camping Area is located mid-way between Baldrys Crossing and Boneo Road on the Two Bays Walking Track. It is a north facing open and level grassy area in a remote bush setting near Lightwood Creek accessible only by foot. The nearest vehicle access is 1km away at Rogers Road Gate 3 or from the Baldrys Crossing / Boneo Road trailheads. The camping area consists of two defined zones with space for 4 sites for up to 6 people. One zone has low picnic tables. A non-flush toilet is provided adjacent to the camping area. The camp has a 2 night maximum stay.

Fees no longer apply to this campground. No bookings are taken for campgrounds where fees do not apply.  Camping is first in, first-served